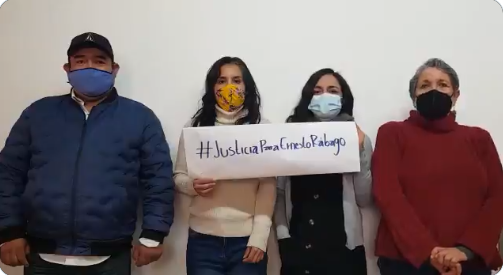 Norte Digital has explained: “Ernesto Rábago Martínez was a defense lawyer for the territory who supported the Baquéachi community, which was the victim of the dispossession of thousands of hectares of land, but thanks to the work of him and his wife [Estela], they managed to recover part of the lands that had been taken from them.”

That article adds: “Ernesto was murdered on Monday, March 1, 2010, and to date, his murderers have not been arrested, nor has it been clarified who or who ordered his death, despite multiple evidence of threats from caciques who harassed them.”

PBI-Mexico has highlighted the high cost of defending land and territory in the Sierra Tarahumara. In this article, they cite the assassination of Ernesto.

Last year, more than 200 Indigenous Rarámuri from the communities of Baquéachi, Chinéachi, and Bakuséachi in the Sierra Tarahumara marched in Chihuahua to demand justice on the 10th anniversary of the murder of Ernesto.

A statement read at that assembly noted: “Ernesto Rábago’s death was a direct consequence of his work in favor of indigenous communities.”

CEDEHM has documented that at least 38 human rights defenders have been killed in Chihuahua between 1973 and 2019.

Webinar with ASMAC on March 11

To hear Isela Gonzalez, the director of ASMAC, speak about the defense of Indigenous rights and territory, please join us on Thursday, March 11 for a PBI-Canada webinar that will highlight the impact of Canadian mining companies in Chihuahua.

To register for the webinar with Gonzalez, please click here.