On November 9th, 2020 Peru was rocked by mass protests across the country against the Congress’ impeachment of former President of Peru, Mr. Vizcarra, over alleged bribery charges. The Speaker of Congress, Manuel Merino, took over as interim president, a move regarded by many Peruvians as a coup. This political crisis and instability augmented the problems in a country deeply affected by the coronavirus pandemic with more than 968,846 coronavirus cases, and 36,104 deaths. Thousands of demonstrators many of them young gathered around Lima and other cities across the country to protest, most of them peacefully. The police responded to the crowds by firing tear gas and rubber bullets, which led to several people being injured and two people being killed. The victims were identified as Jack Brian Pintado Sanchez, 22, and Jordan Inti Sotelo Camargo, 24. Peru’s human rights coordinator reported more than 40 people missing following the protests on November 14th and 90 people being treated for injuries. On November 15th, Manuel Merino stepped down amid nationwide unrest and fury over the killings of the two protestors. On November 16th, Peruvian lawmaker Francisco Sagasti was sworn in the as interim president after being voted by Congress, he is expected to serve out his term until July 2021, with new presidential elections scheduled for April.

What is happening in Peru?

What we are seeing here is the result of a democracy that did not respect human rights and basic rights for almost 20 years. Since the fall of Fujimori’s dictatorship, political sectors that represented businesses interests both legal and illegal began to take more and more power. These powers never disappeared, and on November 9th, they decided to take complete control by replacing Vizcarra with a de facto government and putting Merino at its head, acting as a puppet controlled by these powers. They decided to deprive us of democracy with institutionalism that until this day does not recognizes or protects indigenous rights and rights of victims of forced sterilization, thousands of people in the country. 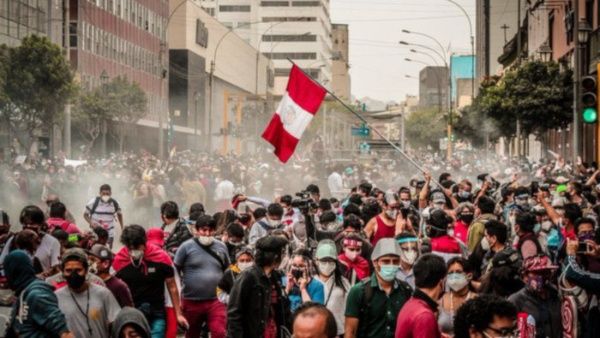 Photo: Protests were registered in several cities such as Lima, the capital, which were violently repressed by the Peruvian police. (Twitter @ari_vol_6)

What are the human rights violations?

It has not been like out of anywhere that from one moment to the next they began to use force indiscriminately and irrationally and to commit human rights violations. It must be taken into account that the police have already been committing human rights violations for a long time. In these 20 years of democracy there have been more than 100 deaths, almost 150 people killed by police repression due to social conflicts and a series of actions that goes against the very nature of any rule of law were also endorsed, for example, the hiring of the police to extractives, mining companies, oil companies, even places where there were protests of social conflict. Then, when there was a social conflict between the local population and the mining company, and the local population went out to protest, the police defended the mining company and not the population which it is intended to protect in the first place. For these 20 years, the government has been endorsing a series of reforms aimed at arming the police that has led to what was seen during the week of protests in November. But it also gives you a lot to think about how this had been repeated in the country, there were deaths due to the actions of the police, and people did not react, they only reacted when it was in Lima. There are many deaths that are still unpunished, there is no justice, there are no sanctioned police officers, so all this fabric that has been cut little by little which has led to these Human Rights violations. 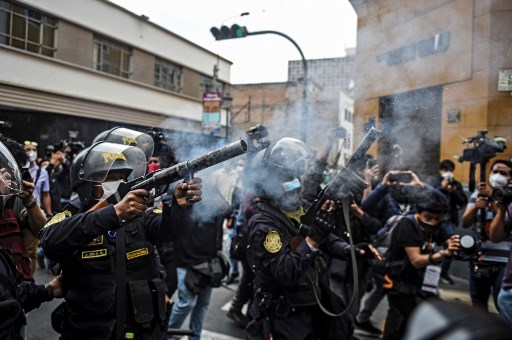 Photo: The police repress a demonstration in Lima (AFP)

Why is the need for the state to allow peaceful protests so important?

First, because it is a right, the right to protest, you have to guarantee it by giving it the conditions to exercise it, and secondly, when these protests are generated when they demand their rights, Indigenous peoples and populations are doing work that should be done by the State, it is the State that should guarantee human rights. When they do not do so, the population complains, but that is because the state is not fulfilling them, and it is the obligation of the State. So, it not only has the duty to guarantee the rights of the protest, they have the duty to guarantee human rights and they are not doing it and that is why indigenous populations and communities and students come out to demand change.

How can the international community help?

By being very attentive! First, pay attention to what is happening in the country, Chile and Peru are examples of democratic miracles. We have shown that these economic models do not work, these institutions that supposedly are solid but do not guarantee rights, they do not work if there is no support from grassroots actors and if there is no respect for human rights. What has taken place in Peru is the seizure of power by these undemocratic powers, and the citizens came out to protest. This is a sign of hope, but it is also an example that governments and institutions that looked very solid in its exterior were just shells, and inside they were not reacting well. In Peru, there are many illegal powers, conservative actors, anti-rights actors, that have had a very strong role, the first thing they wanted to do when they came to power with Merino was to remove the gender focus, remove the school curriculum, remove everything that is equality of gender and sexual and reproductive rights. We need more attention to be paid to the country, for these 20 years the economic miracle made the international community not look at us, they thought that as far as human rights go, everything was well, and we already saw that this is not the case.

I understand that you were a former PBI volunteer. How has your experience with PBI influenced and prepared you for your current job?

PBI-USA expresses solidarity with the victims of police violence and the human rights defenders in Peru and across the world, as they continue to face criminalization for the important work that they do. We will continue to monitor closely the situation as it unfolds. If you would like more information on how to get involved and support our work, including field volunteer opportunities, please visit our website.