"The pandemic changed everything," Berenice Celeita

With indignation, Berenice Celeita spoke about the poverty and violence that she sees every day. Her extensive experience defending human rights began 35 years ago when she studied with the famous lawyer and sociologist Eduardo Mendoza Umaña – a pioneer in the defense of human rights in Colombia – who was later murdered due to his work.

Since then, Berenice Celeita has not stopped. In 1999, she founded Nomadesc, an organizational name that combines “nomadic” –reflecting the reality of displaced communities– and ESCR (DESC in Spanish), the acronym for social, cultural, and economic rights. PBI has accompanied the defender, social communications professional, and forensic anthropologist for 21 years.

“We cannot allow face masks to silence us”

When Celeita talks about how the Covid-19 pandemic affects communities who, for years and even decades, have lived in poverty as a population displaced by the violence, her pain and anger are apparent. Due to COVID they haven’t even had access to informal work. “They are literally starving to death,” says Celeita, upset by the situation. It has been hard for Nomadesc to accompany them this year, because paradoxically, these communities have also lost their right to social-legal support.

Celeita does not doubt that COVID-19 must be taken seriously, but she believes that many of the government emergency decrees “put the defense of life in jeopardy.” At the beginning of the pandemic, they were not allowed to accompany communities in the territory – something that is central to Nomadesc’s work. While waiting for a special permit they requested from the municipal government to respond to community requests, they opted for virtual channels. This is another headache, not only due to lack of connectivity but also because of security problems. “As you know, it isn’t safe, many of us are intercepted, our calls are continuously monitored and monitored,” states Celeita.

This is not an exaggeration; due to their work, members of Nomadesc have received innumerable threats over the years. Celeita was a victim of   `Operation Dragon’ , where union leaders, human rights defenders, and political leaders in Valle del Cauca were the target of an assassination plan and a smear campaign. 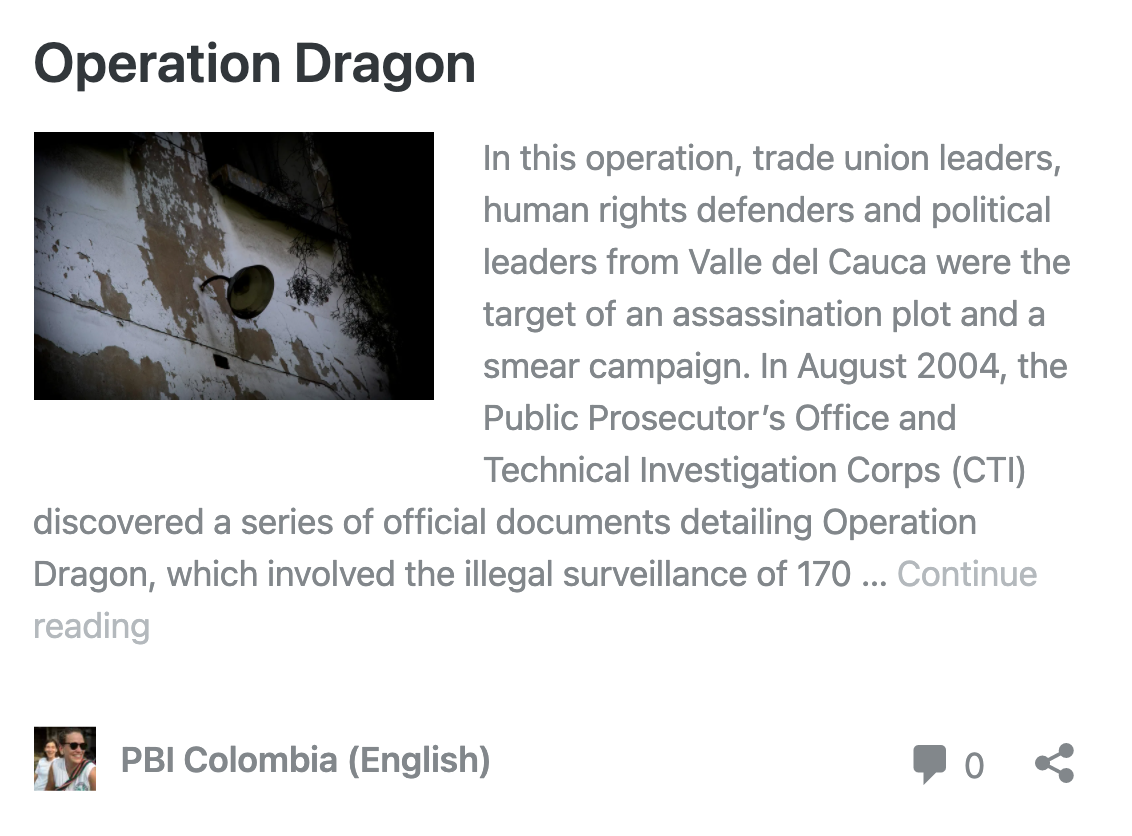 “We protect life, therefore, we must have at least minimum digital security standards,” she insists, but these do not exist. Even though the Inter-American Commission on Human Rights granted Celeita precautionary measures and requested that the Colombian State adopt the necessary measures to protect her (this happened in 1999), she has not received any kind of security detail or an armored car from the State. “We had to seek out other protection alternatives for safe transportation and accompaniment in the regions, but we continue accompanying the communities.”

This October, they participated in the indigenous “Minga” or collective action, where over 7,000 individuals traveled from southwest Colombia to Bogotá, a 500 kilometer journey, to call on the national government, demanding a response to the huge wave of violence and murders that have been increasing throughout the country but, in particular, in departments like Cauca, Nariño, and Valle del Cauca. One of the minga’s most important achievements was bringing to light the situation in southwest Colombia, which is often hidden, states Celeita and she laments that “the mass media does not report on what is really happening in the territories.”

“Of the approximately 72 massacres that have taken place in Colombia this year, 30% occurred in the southwest and the majority of those were in Cauca.”

Celeita is very concerned about what is happening in this part of the country and says that of the approximately 72 massacres that have taken place in Colombia this year, 30% occurred in the southwest and the majority of those were in Cauca. At the end of 2019, a wave of crime began against the indigenous guard, who are territorial authorities who perform very important protection activities. In October of 2019, the indigenous authority Cristina Bautista and five indigenous guards who accompanied her were shot to death in Cauca. “I am convinced that there are more of us who want peace than those who want war.” These were the authority’s last words.

This is not a new situation

Persecution against leaders and communities is historic in this region. For Celeita, the violence in the southwest is related to mining-energy megaprojects. “The State has violated the right to prior consultation, and this has generated poverty, forced displacement, and structural racism.” The violence is also related to a proliferation of illegal crops and a strengthening of illegal armed actors.

Celeita is willing to dedicate her life to the defense of human rights if this is what is needed for the communities victims of violence to live in peace and with equality. This woman, with a contagious smile, will continue traveling to indigenous territories, in the context “mingas” year after year. Why do you do it? “Because we believe that the only way for communities, ethnic and social groups, and rural and urban populations in Colombia to defend their rights is for them to speak up publicly.”

“If there is no truth, if there is no justice, if there is no comprehensive reparation, there are no guarantees of non-repetition. And, if we don’t have guarantees of non-repetition, the only opportunity to defend life is to go out and talk about what the communities have said: that their rights continue to be violated, that they continue to be killed, and that they continue fighting to end the deaths due to persecution for their social leadership or defense of the communities’ collective rights.”