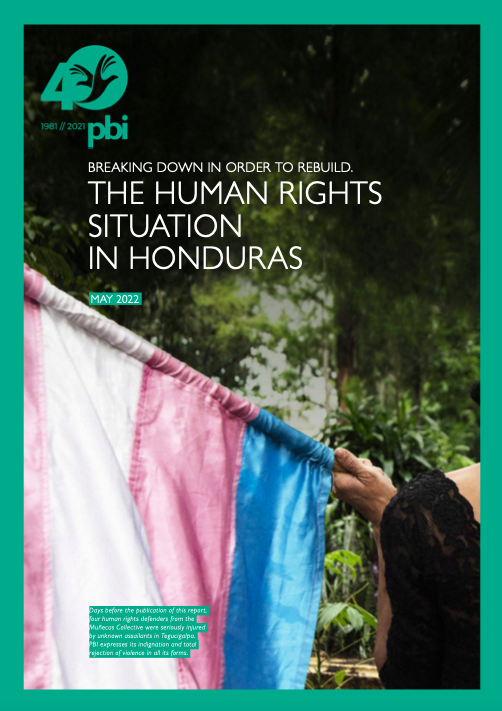 In a report on the first hundred days of Xiomara Castro’s administration, the Peace Brigades International Honduras Project noted some positive initiatives implemented by the Honduran government and made recommendations for the international community. Some of the positive initiatives cited include the repeal of the Law of Secrets in March, which had been a serious obstacle to journalists in their fight against corruption. PBI Honduras, as well, applauded the government’s February ban on open-pit mining and their review and subsequent suspension and cancellation of existing mining project’s environmental licenses. However, PBI Honduras notes the shortcomings of this ban. The lack of an executive decree leaves this initiative without the official support of the executive branch and leaves little clarity on the initiative’s application. Another positive initiative lauded by PBI Honduras is the repealing of the Zones for Employment and Economic Development law. Originally passed in 2009, the law allowed for the designation of “zones:'' areas of Honduran territory where investors control tax, security, and conflict-resolution policies. In order to be effective, the decision must be ratified and published in the official newspaper, La Gaceta.

Other positive measures include the demilitarization of Honduran penitentiaries, by order of President Castro in March 2022, with a ten-month deadline to transfer control of the prisons and the National Penitentiary Institute to the National Police. Another positive change follows the Constitutional Court’s April 2022 resolution declaring Executive Decree PCM 052- 2019 unconstitutional. This will lead to rural areas seeing a possible reduction in military influence. PBI Honduras noted some of the negative initiatives such as the Honduran Congress approving a budget of over $350 million for the Honduran Department of Defense. This increase in expenditure concerns activists that point out prior human rights violations committed by these security forces and have led to investigations by the Office of the United Nations High Commissioner for Human Rights.

PBI Honduras has issued some recommendations for the international community within their report, this includes ensuring compliance with international principles during the election of high-ranking public officials, particularly during the upcoming November 2022 election of nine judges to the Supreme Court of Justice. Other recommendations include supporting the process to eliminate the Military Police of Public Order (PMOP). The elimination of the PMOP will assist in advancing the demilitarization of Honduran society. PBI Honduras also encourages the international community to call for the prosecution of human rights violations committed by state security forces and the prosecution of violations of the right to free, prior, and informed consultation guaranteed by the Convention 169 International Labor Organization. Other recommendations and observations made in the report, regarding women’s rights (noting how, with a femicide rate of 6.2 killings per 100,000 women, Honduras is the most dangerous country in Latin America for women) and LGBTQ rights.