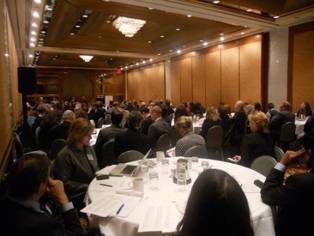 On December 14, 2010, the Connect U.S. Fund, in partnership with the Rockefeller Brothers Fund and with assistance from the Ford Foundation, the Ploughshares Fund, and the United Nations Foundation, held a community-wide meeting with over 150 participants and 16 high-level panelists, including keynote speaker UN Secretary-General Ban Ki-moon.

In order to encourage networking and collaboration among the NGO (non-governmental organization) community, Connect U.S. Fund organizes a community-wide meeting twice a year.  The December 2010 meeting had a dual purpose.  The first goal was to engender broader, deeper cooperation and collaboration between civil society and the UN on the shared aim of promoting a better world.  The second goal was to build bridges between the D.C. and New York policymaking communities.

Throughout the day, panelists discussed a range of issues, including nuclear nonproliferation, climate change, development, and human rights.  There was general agreement on the success civil society has had working on these issues, but the consensus remains that there is still much progress to be made. 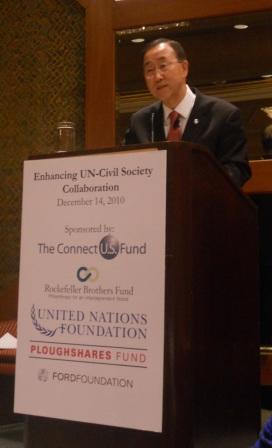 The Secretary-General praised the progress made at the recent climate negotiations in Cancun, Mexico.  He credited multilateralism and the political will among member states for addressing the defining issue of our time.  He remarked that even though the economic crisis has created an environment of limited resources, states are still able to generate sufficient political will to make lasting change.

The Secretary-General observed that governments are now aware that climate change is connected to peace and security, and that the task for civil society is to continue emphasizing this narrative. Climate change should be addressed from a broader and more comprehensive perspective.

Secretary-General Ban lauded the progress made in regards to the Millennium Development Goals and remarked that the world is now on track to cut poverty in half by 2015.  More people have access to water, there is expanded treatment to HIV/AIDS, and serious inroads have been made to control neglected tropical diseases.

However, the economic crisis has slowed many of these advances; for example, malnutrition and unemployment remain unacceptably high.  Governments need to use their resources in the areas in which they will have the greatest impact – education, health, jobs, infrastructure, smallholder agriculture, and empowerment of women and girls.  Empowering women and girls is the area in which the UN has seen the best developments. The UN Secretary-General urged NGO community to move development to the top of their agendas and to persuade governments to do likewise. 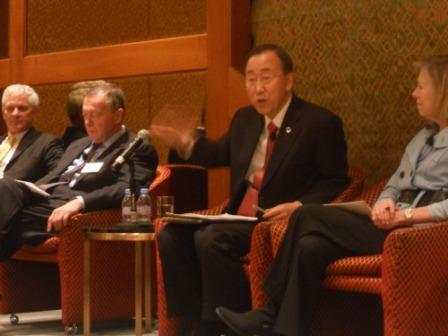 The Secretary-General pointed out that not all crises this year were economic.  An increase of natural disasters led to humanitarian assistance becoming a growth industry.  Much of the year was spent responding to various disasters, particularly in Haiti and Pakistan.  The UN welcomes any comments the NGO community might have about its “cluster approach” to disaster relief and what improvements could be made in this regard.

Secretary-General Ban underscored the fact that political reppression and intolerance have thrown a spotlight on the need for greater human rights protection.  Now more than ever NGOs need to support institutions that protect these rights.

The Secretary-General sounded a cautionary note on the issue of disarmament. He praised the work civil society did at the Nuclear Nonproliferation Treaty Review Conference, but suggested the issue of nuclear nonproliferation will suffer a serious setback if New START is not ratified by the U.S.

UN Secretary-General Ban ended on a positive note, remarking that civil society has played an important role in improving the human condition and advancing the values of the UN Charter.

Overall, panelists discussed key opportunities and challenges for progress on climate change, nuclear nonproliferation, and human rights, and how civil society can play a larger role.

Throughout, the panelists emphasized the important role civil society plays in assisting governments by promoting transparency.  The work of NGOs was praised, particularly in the area of cooperative threat reduction.  However, some panelists pointed to the disconnect between the relative modern-day strength of civil society and the impression that progress on our issues seems to be regressing.  The panelists discussed the remarkable opportunities NGOs have to engage and convene and the unique abilities that allow organizations to drive agendas in a way that cannot be done through formal government channels.  The respondents encouraged NGOs to play the dual role of watchdog and innovator. 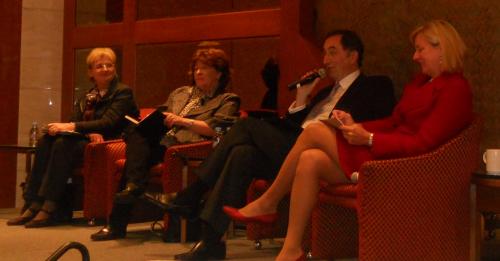 Even though the UN is involved in significant partnerships with NGOs, particularly in the area of disarmament, there is still room for reform in the UN General Assembly that could allow greater civil society participation.  A remark was made that the rise of civil society organizations was one of the transformative events of the twentieth century.

However, panelists agreed that civil society organizations still face serious structural limitations and obstacles.  Some of these obstacles can be overcome by utilizing networking capabilities and taking advantage of information and communications technology.  Another way to overcome these challenges is to build public-private partnerships and encourage the involvement of NGOs from the global South. Panelists recommended that NGOs concentrate on working with helpful institutions in order to advance human rights and global governance.

Panelists remained optimistic about U.S. involvement with the Human Rights Council, stressing that the U.S. has the ability to influence reform regardless of institutional limitations.  Additionally, they underscored the most important reform for the United States: changing the working culture of the Council.

Membership, regional solidarity, and country-specific resolutions were highlighted as some other issues that very much need to be on the reform agenda.  It was suggested that the best way to approach reform is by building broad coalitions based on shared values.  The discussion ended by exploring challenges of the Council, particularly its image among Americans.  Supporters of the Council need to tell the story of its successes and put them in a framework that does not create unrealistic expectations.