Guatemalan President Jimmy Morales, in an August 31 press conference in Guatemala City, announced the non-renewal of the mandate of the International Commission against Impunity in Guatemala (CICIG). The UN-backed body has been helping Guatemala’s courts fight corruption for the past eleven years. CICIG’s mandate is set to expire in September 2019. The intervening time, Morales clarified, was to be used for CICIG to transfer its information and capabilities to the Public Ministry. On September 4, however, President Morales took matters a step further, blocking CICIG Commissioner Iván Velásquez’s re-entry into the country while he attended a series of previously scheduled meetings in Washington DC, despite Guatemala's Constitutional Court ruling that the Migration Directorate could not bar Velásquez’s entry into Guatemala. 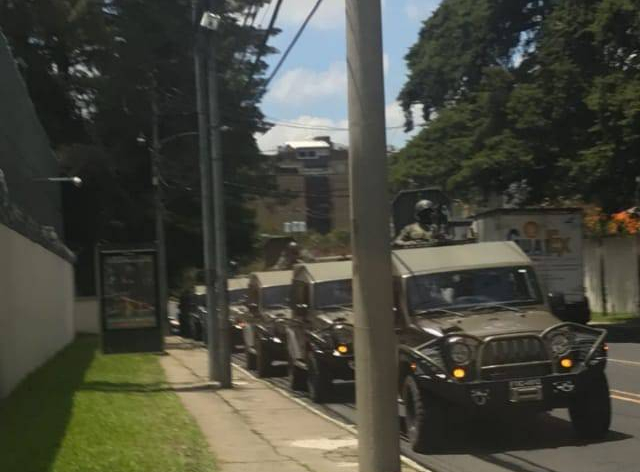 President Morales employed techniques which, according to analysts, were designed to intimidate. At the press conference he surrounded himself with high-ranking military and police officers, at least sixty of whom were arranged on the steps behind him. The visuals hearkened back to the coup d’etat of 1982, when General Efraín Ríos Montt overthrew President Romeo Lucas García. Also calling to mind the possibility of military force were patrols of military vehicles in the streets on the morning of the press conference in zone 14, where the headquarters of the CICIG is located, as well as in front of the U.S. Embassy.

Morales accused CICIG of violating the laws of Guatemala and of inducing people and institutions to participate in acts of corruption and impunity. In his speech he also warned that: "Guatemalan institutions and officials are not obliged to comply with illegal orders." This statement appeared to be a warning to the Constitutional Court (CC), which last year prevented Morales from expelling CICIG Commissioner Iván Velásquez from the country, ruling that the president was not authorized to interfere with the work of CICIG.

Morales made his announcement as CICIG was closing in on prosecution of Morales himself for illegal campaign financing. In the preceding weeks, CICIG and the Public Ministry had requested that his presidential immunity be suspended. As the Guatemala Human Rights Commission points out in a communique, on August 10, "CICIG and the Public Ministry had presented an impeachment request against Morales for failing to report over $1 million that was given to voting table monitors from Morales’ party on the day of the national election." On August 23, the Guatemalan Supreme Court found that the impeachment could proceed, and on August 28, the congressional commission overseeing the impeachment was formed.

On September 5, an injunction was filed before the Constitutional Court protesting the barring of Iván Velásquez’s entry into the country. The judges of the Constitutional Court are expected to rule on the injunction in the coming days as they are already facing significant pressure. Last week, despite pressure from the U.S. Embassy and Congress, the Constitutional Court ruled that U.S.-based Tahoe Resources’ El Escobal silver mine (also known by its subsidiary’s name, Minera San Rafael) must keep operations suspended until a consultation with affected communities is carried out. The ruling to continue the suspension of operations sets a precedent for other cases in which large-scale development projects have been undertaken without prior consent.

In response to the decision not to renew CICIG’s mandate and to bar Ivan Velasquez from Guatemala, G13 countries—with the exception of the United States—issued a statement expressing concern and re-affirmed CICIG’s important work. The United States’ highest-level response came a day after Morales’ August 31 press conference. Secretary of State Mike Pompeo tweeted, “Our relationship with Guatemala is important. We greatly appreciate Guatemala’s efforts in counternarcotics and security.” Tweets originating in the U.S. Embassy, however, expressed concern about the use of U.S.-donated military vehicles in the streets around CICIG and the U.S. Embassy, and affirmed the importance of CICIG’s work.

On September 5, the United Nations Secretary General made clear that he wanted Ivan Velasquez to remain at the helm of CICIG, working from outside of the country until the situation was resolved.

The Unit for the Protection of Human Rights Defenders in Guatemala (UDEFEGUA) in a communique released on September 6 detailed the harassment and intimidation of some of the country’s most prominent human rights activists in the wake of the president’s decision. UDEFEGUA documented efforts by the National Civil Police to locate at least seven leaders of human rights organizations in the hours prior to and following President Morales’ August 31 press conference, including Nery Rodenas, director of the Archbishop’s Human Rights Office of Guatemala; Helen Mack, Executive Director of the Myrna Mack Foundation; Alfonso Carrillo, a human rights attorney; Daniel Pascual, leader of the Campesino Unity Committee; Iduvina Hernandez, Executive Director of the Association for the Study of Security in Democracy; Jorge Alberto Santos, General Coordinator of UDEFEGUA; and Claudia Virginia Samayoa, president of the Board of Directors of UDEFEGUA and a member of the Executive Committee of the World Organization Against Torture. The police claimed to be conducting an analysis of the effectiveness of protective measures granted to the human rights leaders. Several of the leaders sought, however, are not beneficiaries of protective measures. Various human rights and popular organizations have been subject to surveillance since August 31 and defenders’ movements have been monitored by police and military units. Military vehicles have been parked outside of a number of organizations. For example, UDEFEGUA reports that since August 31, military vehicles have been parked continually outside of the organization’s office. In protest of the decision to ban CICIG, human rights defenders have planned a series of demonstrations and road blocks for the week of September 10th.