Colombia: Leaving Their Homes to Save Their Lives

Internal forced displacement is a global disaster. The Internal Displacement Monitoring Centre (IDMC) reports an ever-increasing and worrying figure which is greater than the total worldwide number of refugees: 65.6 million people are in a situation of forced displacement due to armed conflict, persecution, violence, and human rights violations. There are a number of reasons why these people and families have left their homes to look for refuge, and these mainly relate to natural disasters, armed conflicts, and violence. Nevertheless, this problem continues to be invisible and is not being confronted to a sufficient extent. Forced displacement has a multitude of complex impacts on victims, including on their socio-economic conditions and on their psycho-social and emotional wellbeing, and it also has a number of impacts on society itself.1

Colombia is all-too familiar with this problem, as the country with the second-highest number of internally displaced persons in the world with the figure currently standing at forced to leave their homes and lands in 2017 to flee from fighting and other types of violence. 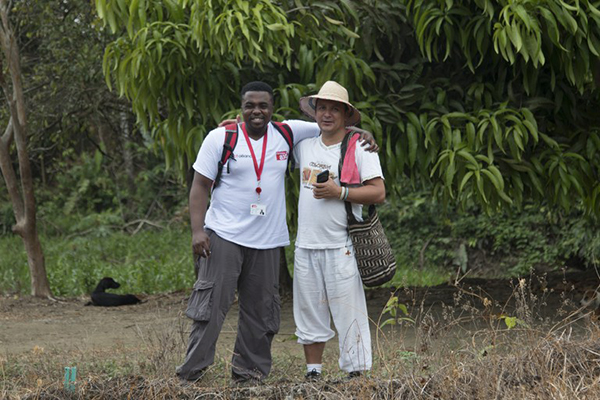 The British NGO Christian Aid has been reporting on this situation and supporting the Inter-Church Justice and Peace Commission (Comisión Interclesial de Justicia y Paz) and PBI for a number of years. This year the NGO is focusing on this tragedy experienced by thousands of families, and will carry out a campaign in May to make some of these people’s stories visible. For this purpose a delegation traveled to Colombia and visited the Bajo Atrato region and San José de Apartadó where they met with and heard the stories of some of the families that continue to live in a situation of forced displacement within Humanitarian Zones and in the Peace Community. The first meeting was held on Mario Castaño’s family farm, in the Curvaradó river basin, the same farm where Mario was killed on 26 November 2017. Different leaders also arrived from the village of La Madre in the La Larga Tumaradó river basin, to tell their life stories, to talk about the displacement caused by the different military operations in the Bajo Atrato region between 1996 and 1997, and to explain their difficult return home. Most of these people had returned home only to find their land occupied, and so they began resistance struggles in order to recover their lands.

Faced with threats and persecution, these families maintain their hopes that they can return home and recover the titles to their lands.2 Please have look at the photo galleries to get to know some of their stories.