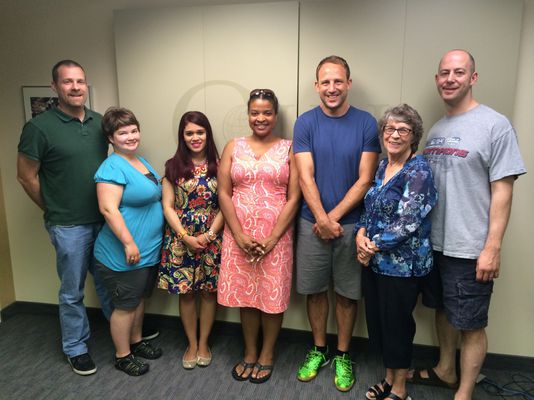 The decision-making body of PBI-USA is the National Coordinating Committee.

Its current members are:

Faith Garlington
Executive Coach
Chicago, Illinois
Faith Garlington is an optimistic, idealistic, and visionary change agent. She currently serves a life and executive coach. Her local and international experiences have all fed her desire to make a positive contribution to the world at every step of her journey.  Whether an endeavor involves an individual pursuit or a global program, new ideas energize Faith. Faith served as a nonviolent peace accompanier in Colombia where she learned about the power of sustainable economic development in preventing and recovering from political violence. Faith joined the PBI-USA Board of Directors in 2012. Before joining the Board, Faith was a Kiva Fellow where she was engaged in the financial reporting/borrower protection processes. Faith also has previous experience as a community and field organizer for various campaigns throughout the country. Faith graduated from Oklahoma State University with an MBA and an International Studies Graduate Certificate.

Andrew Miller
Advocacy Director
Amazon Watch, Washington, DC
Andrew brings two decades of human rights activism and international field experience to his work on the NCC. As Amazon Watch's Advocacy Director, he has collaborated closely since 2007 with their indigenous partners from Brazil, Colombia, Ecuador, and Peru, facilitating rights-based advocacy at Washington DC-based institutions such as the multilateral banks, U.S. executive offices, and the Inter-American Commission on Human Rights. He travels regularly to the Amazon region and offers frequent commentary to media such as Al Jazeera English, CNN en Español, and the BBC World Service. Previously, he held several positions at Amnesty International USA, led capacity-building efforts for southern Sudanese community-based organizations through Mercy Corps, and served as a PBI field volunteer in Colombia in the late 90s as well as co-director of the country group.

Janet Powers, Ph.D.
Professor Emeritus of Interdisciplinary Studies and Women’s Studies
Gettysburg College, Pennsylvania
Janet M. Powers, now Professor Emeritus of Interdisciplinary Studies and Women’s Studies at Gettysburg College, Pennsylvania, taught for 49 years in the fields of South Asian literature and civilization, womens’ studies and peace studies. She holds a doctorate from the University of Wisconsin at Madison and is the author of Blossoms on the Olive Tree: Israeli and Palestinian Women Working for Peace (Westport, CN: Praeger, 2006), Kites Over the Mango Tree: Restoring Harmony Between Hindus and Muslims in Gujarat (Praeger 2008), and a book of poetry, Difficult to Subdue as the Wind (Finishing Line Press, 2008). She is currently working on a study of Bosnian women moving on from war and is directly involved in both peace-building and a fair trade craft project in Bosnia. Janet has two daughters, Shanna and Heather, and four grandchildren.  In addition, she is a practicing mediator with Mediation Services of Adams County and offers workshops in conflict resolution. Janet joined the Board of Directors of PBI-USA in 2013.