Human rights defenders--courageous people who stand up for the rights and dignity of their communities because they believe in peace and justice for all--are at the heart of all we do at PBI. We provide protection, support, and recognition to local human rights defenders who work in areas of repression and conflict and have requested our support. In addition to this international protective accompaniment, we carry out peace education and security training, and help human rights defenders make links with others. We advocate at all levels--from the soldier at a local checkpoint to national governments and international bodies such as the UN--for international human rights accountability. Our international volunteers send a powerful message that the world is watching and prepared to act.

Who is a human rights defender?

Human Rights Defenders (HRDs) may address any political, civil, economic, social or cultural human right. They may be groups or individuals organizing to protect their natural environment, or working to discover the truth about enforced disappearances. They may be women's groups supporting survivors of domestic and sexual abuse, or indigenous communities struggling for recognition of their land rights. They may be lawyers, offering legal advice to marginalized communities, or representing victims of state violence.

In countries where communities are subject to violent conflict, intimidation or repression, human rights defenders can be key agents for resistance and change, whose work has the potential to bring about the long-term development of democratic civil society and ultimately peace. This often places them at risk, making them targets for threats, abductions, forced disappearance or assassination, and other insidious kinds of attack, including public stigmatization, defamation or criminal proceedings on trumped up charges.

PBI exists to support and protect these courageous people who stand up for the rights and dignity of their communities because they believe in peace and justice for all. PBI's international volunteers bring visible support and represent an international spotlight that helps deter violence and widen the political space in which defenders can continue their legitimate work without fear.

What is protective accompaniment?

PBI is best known for pioneering a strategy of nonviolent intervention in conflict zones called protective accompaniment, in which teams of highly-qualified field volunteers, backed by an international support network, physically accompany human rights defenders and communities who receive threats of political violence. Our independent, non-partisan stance helps PBI earn the trust of local grassroots activists, helping them to endure in the face of severe repression.

Through protective accompaniment, international presence and empowerment that support local initiatives, PBI makes space for peace and contributes to developing a culture of peace and justice. We only act on the request of local non-violent organizations working for human rights and development of civil society. 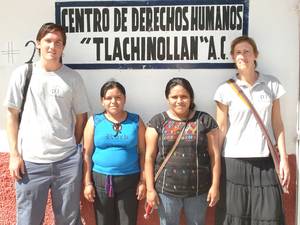 Protective accompaniment has helped to protect the lives of hundreds of threatened activists, many of whom have faced death threats and all of whom have faced severe harassment from military, paramilitary or other violent groups. Groups we accompany include indigenous communities, environmental organizations, lawyers, women’s organizations, trade unions and relatives of the disappeared.

Protective accompaniment has three effects. The presence of international volunteers protects threatened activists by raising the stakes for potential attackers. It provides moral support and international solidarity by safeguarding threatened organizations, giving them the confidence to carry out their work. In addition, it strengthens the international movement for peace and human rights by giving accompaniment volunteers a powerful first-hand experience. This often becomes a source of inspiration to themselves and others when they return to their home countries.

Our protective accompaniment work is carried out through our various field projects:

Accompaniment protection and the line of command

In the more traditional model of international human rights, pressure is usually directed at the top at the same time as providing other forms of support for threatened HRDs. However, systematic human rights abuses require the collaboration of players in lines of authority at local, national and international levels. PBI's approach is multi-layered in that it seeks to influence every point in this chain.

The work of PBI-USA focuses on supporting the field projects through volunteer recruitment, fundraising, public education and political support networks. PBI-USA also promotes education and training on peace and nonviolent strategies, as well as conducts outreach activities, such as speaking tours, in order to build awareness for the field of human rights, peace and conflict resolution in the U.S.