Gender Violence in Ciudad Juárez at an Alarming Rate

Mexico City, 19 July 2016.– Red Mesa de Mujeres (Women's Roundtable Network) of Ciudad Juárez, reported via its Monitoring and Investigation Program that in January to May, Chihuahua has continued to demonstrate the second highest rate of rape cases (see attached infographic), with 16 femicides also being recorded in Ciudad Juárez between January and June 2016. 50 complaints were made at the Special Prosecutor's Office for Female Victims of Gender Violence in the first 75 days of the year.

According to the figures published by the Marisela Escobedo Ortiz Women's Centre for Justice, 2553 women attended the Centre for the first time between January and May 2016 (compared with 2181 in the first five months of 2015), resulting in over 16 cases per day. In accordance with Irma Casas Franco, Director of the Centre, the women seeking help are increasingly young and their physical injuries are increasingly severe. Similarly, the average age of the victims has fallen from 35 to 25 years; and there have even been cases of female victims as young as 14 years of age.

The gender violence in Chihuahua has driven several organizations to request a Gender Violence Alert to be decreed in the state, however, the federal government has failed to respond. The CSOs that focus on gender issues in the state of Chihuahua have suffered reprisals due to the work that they carry out. This situation reflects a global panorama of agression against human rights defenders, in which 19 murders have been recorded in 7 years. 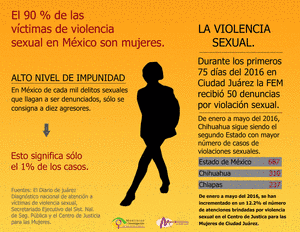 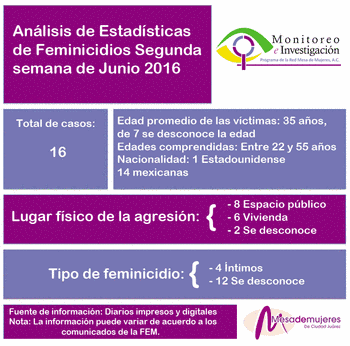