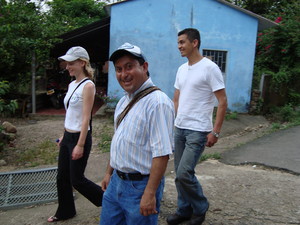 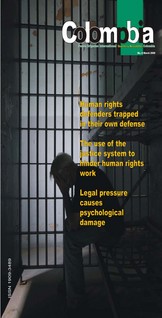 In February 2008, PBI Colombia published a special bulletin addressing ways in which the judicial system has been manipulated to seriously undermine the work of Colombian human rights defenders. Examples of this abuse range from opening a criminal investigation for slander against Iván Cepeda, a prominent human rights leader and journalist, to the arrest and lengthy detentions of six members of the Cimitarra Valley Peasant Farmer Association (ACVC) on charges of rebellion. These accusations, as well as the investigations and detentions that follow, impede the legal and legitimate work of organizations accompanied by the PBI Colombia Project.

The consequences of unfounded accusations against human rights defenders are explored at length in the Colombia Project special bulletin. These accusations divert limited resources to costly and time-consuming legal defense. They de-legitimize and stigmatize the work of human rights defenders, increasing the risk of threats and physical attacks against individuals and communities. Unfounded accusations can also foster an environment of fear and uncertainty that undermines organizations and movements. Finally, these judicial proceedings limit the reach of human rights work to the detriment of civil society as a whole.

While criminal charges may ultimately be dropped and leaders released from detention, unfounded accusations exact serious consequences on individuals and organizations working to defend human rights. To date, four of the six leaders of the ACVC have been released from detention.  Prosecutors dropped charges against them due to a lack of evidence. However, several leaders remain detained and new leadership had to assume control of the organization during the detentions. Furthermore, authorities failed to suspend the arrest warrants issued against the released leaders, increasing their risk of detention at military check points. PBI is requesting that its international allies urge Colombia authorities to vacate these arrest warrants and to address any institutional problems that have prevented them from doing so to date.

In recent months, the UN Special Rapporteur on Arbitrary Detentions visited Colombia to investigate these and other abusive practices. The Office of the UN High Commissioner for Human Rights in Colombia has also denounced judicial persecution of human rights defenders.

For more information about the persecution of human rights defenders through abuses of the justice system, view the special bulletin by clicking here. 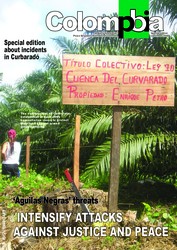 PBI Colombia published a second special bulletin in 2008. Issued in September 2008, it details aggressions against the Inter-Church Commission for Justice and Peace (CIJP) and the communities with whom they work in the Curvarado river basin. The bulletin expresses profound concern for death threats received by members of CIJP, particularly given the context of increased paramilitary activity in the region. Since publication, several other incidents have occurred which underscore the threats to human rights defenders and displaced communities in the process of return. On September 3rd, 2008, a member of CIJP was abducted, threatened, and then released.  Since then CIJP has rotated members of their missionary teams in Curvarado with permanent accompaniment from PBI.

PBI Colombia is also particularly saddened to share the news of the murder of Ualberto Hoyos on October 14th, 2008. Mr. Hoyos was a leader of the Caño Manso community in Curvarado and a witness to the incidents surrounding the 2005 murder of community leader Orlando Valencia.

The context of increased paramilitary activity has also persisted and become increasingly evident.  A day after Mr. Hoyos was murdered, a group calling itself the “Gaitanist Self-Defense Forces of Colombia” (AGC) imposed a shut down of commercial and transport activities in several small cities and municipalities in the Uraba region. They have reportedly issued an ultimatum for demobilized paramilitaries to rejoin their ranks or flee from the region. Pamphlets signed by the same organization were also distributed in Santander, Northeastern Antioquia, and several other Colombian departments. Finally, a threat signed by the same “Gaitanist Self-Defense Forces of Colombia” declared as “military targets” three organizations accompanied by PBI Colombia in Barrancabermeja: the Grassroots Women’s Organization (OFP), the Regional Corporation for the Defense of Human Rights (CREDHOS), and the Cimitarra Valley Peasant Farmer Association (ACVC).

For more information on recent events in the Curvarado River Basin, the region of Uraba, and threats against the Inter-Church Commission for Justice and Peace (CIJP), please visit: www.pbicolombia.org and view the special bulletin here.

Please consider joining the support network for the PBI Colombia Project to receive ongoing updates and to assist us in protecting the work of human rights defenders in Colombia.