PBI and WOLA: Report on the Protection Mechanism in Mexico

Among the key findings the organisations underline the fact that in 38 percent of the mechanism's cases, government authorities are the presumed aggressors of threats and attacks against human rights defenders and journalists. Likewise, the report underlines that the mechanism continues to have an insufficient number of staff, and that  the failure to investigate and sanction attacks on human rights defenders and journalists places them at continued risk. It goes on to mention that not only protection measures are frequently not adequately implemented but also there is often a disconnect between a journalist’s or defender’s situation of risk and the protections provided.

To SEGOB and the Mexican authorities on the Mechanism's Governing Board, PBI and WOLA recommend: to recognize the important role  that human rights defenders and journalists play in a democratic Mexico; continue improving risk analysis practices; report on the effectiveness of protection measures; and improve cooperation at the state and local level. 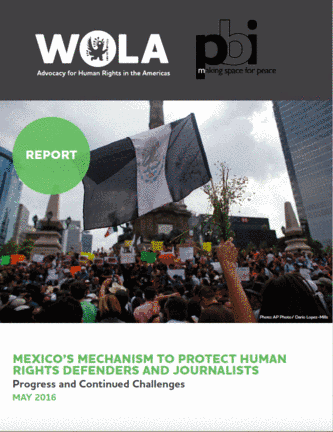