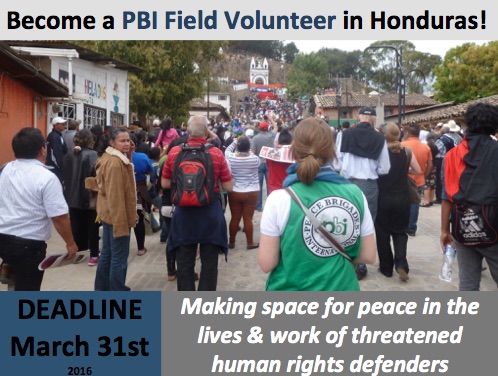 PBI Honduras is currently recruiting new field volunteers as well as reaching out into our networks to expand our current team size with experienced accompaniers. We are urgently calling for ex-volunteers from PBI Latin American projects (or other accompaniment teams) to join the effort of the Honduras Project to accompany this difficult moment in the Honduran social movement. Our goal is to temporarily increase our team's capacity from 6 field volunteers to 7-8 people, which would be in addition to the support already in place including an office person in Honduras and two office staff outside of the country, 5 project committee members, and PBI's international network of country groups such as PBI-USA.

To apply to the team in Honduras as a new field volunteer, click on the photo above. If you have experience serving as a field volunteer and are available to leave for Honduras within the next 1-2 months, please contact Amelia Parker, Executive Director of PBI-USA immediately to be put in touch with our project in Honduras. You can reach Amelia by calling 202-232-0142 or emailing amelia(at)remove-this.pbiusa.org.

Context: Six years after the coup, Honduras still suffers from levels of violence that rank Honduran cities among the most dangerous in the world. After two years of continuous presence in the country, PBI continues to observe patterns that perpetuate impunity and violence. Weak institutions, corruption and lack of judicial independence have led to a situation of extreme vulnerability for individuals, communities and organizations that defend human rights. In January 2016, the Black Fraternal Organization of Hondurans (OFRANEH) demanded  the demilitarization of Garifuna communities after two officials of the Honduran Navy shot and killed two teens, reportedly mistaking them for drug traffickers. PBI-accompanied organization, the Arcoiris Association, reported 21 attacks and 5 murders between July 2015 and January 2016 against the LGBTQUIA+ community, the most recent of which was the murder of Paola Barraza. And on March 2, 2016, the world was devastated to learn of the brutal assassination of human rights and environmental defender Berta Cáceres and the unnecessary detention of Mexican defender Gustavo Castro in Honduras. It is imperative that the international community act to ensure the safety of human rights defenders working and living in Honduras.