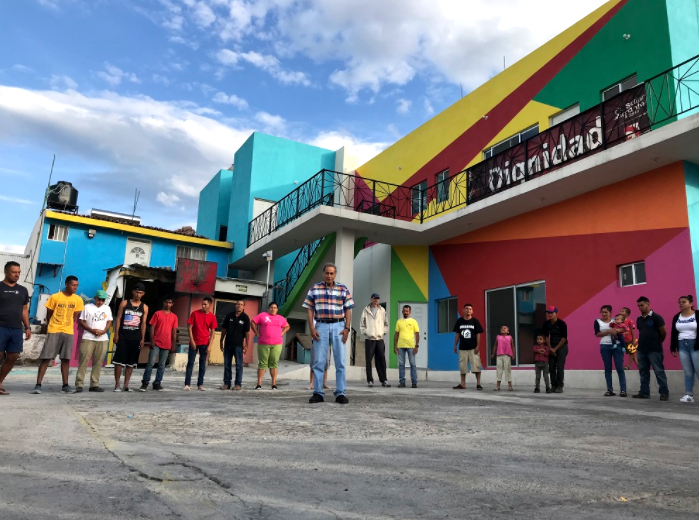 The Madrid-based Spanish digital newspaper Público has published a feature article on the Saltillo Migrant Shelter which has been accompanied by the Peace Brigades International-Mexico Project since 2014.

That article notes: “The shelter is preparing to reopen its doors in the coming weeks, although only at fifty percent of its capacity and with strict safety and hygiene measures.”

“The pandemic forced them to close down in March, which completely affected their ways of working. They had to stop offering the shelter service, but they continued to serve the migrant population as best they could, because ‘people kept coming’.”

José Luis Manzo, the coordinator of the shelter’s humanitarian care area, says: “Since March 1, we have served more than 3,000 people at the door, fewer than we used to. Before the pandemic, in February alone, it was about 1,800.”

He adds: “We had to restructure everything, from how food is served to care at the door and even the way to move. However, the humanitarian assistance team did continue to receive people who presented greater vulnerability.”

The article includes the stories of migrants from Guatemala, Honduras and El Salvador and their reasons for fleeing their home countries.

Some of those reasons include poverty, climate change, the installation of megaprojects and violence. The article adds: “Manzo highlights that the majority of LGBTI+ people who migrate are Honduran trans women.”

With the upcoming US election on November 3, Manzo comments: “The Obama executive carried out a massive deportation of more than two million people. The difference with Trump is that Obama did it quietly. Ideally, immigration policy would change, not only in the United States, but throughout the world.”

Manzo also notes: “There are those who make the attempt [to cross the increasingly walled and policed United States border] up to eight times. Later, they begin to see Mexico as a destination and seek regularization here. Even so, this country has better conditions than Honduras, El Salvador and Guatemala.”

The article concludes: “Migration will continue to be criminalized and the victim of a migration policy without a human rights perspective, conceived from a logic of national security and not of human security. In this way, migration will continue to make its way without institutional mechanisms that guarantee its protection against systematic aggressions by State agents and organized crime.”