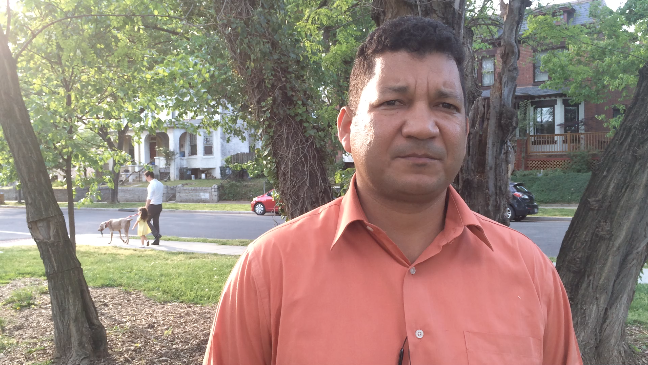 In April 2016, lawyers from CEHPRODEC traveled to Washington, DC to bring attention to the situation they face in Honduras. During their visit, PBI-USA was able to interview attorney Donald Hernandez (pictured) about the situation in Honduras. The following are his reflections.

“For human rights defenders and principally for defenders of territory, Honduras is currently in a very complicated moment. Global Witness, an organization that specializes in environmental issues, has concluded that Honduras is one of the most dangerous countries for land and territory defenders. We can confirm that. Things have also gotten complicated for economic, social, and cultural rights defenders because we struggle against the interests of corporations and politicians who have gotten recent governments to hand over concessions for mining, hydroelectric dams or monoculture projects that are forcing rural families to move to the cities or, even worse, provoking high levels of migration to the United States or Europe. This has us very concerned because combined with high levels of criminality and our geographic location, it has catalyzed Honduras being the place where multiple organized gangs are fighting for territorial control of the drug routes. And it is us who have to offer those who are killed, who have to offer up those who are criminalized. So we are bringing our voice out to the world so a focus is put on Honduras, obligating our government to respect human life and to respect civil society organizations. They should offer us the needed space in order to participate in transparent processes. Our voices should count in terms of the possible ‘development’ that comes to our lands.”

‘We have been a part of a tour, principally to Europe, in which we have been meeting with parliamentarians of different European countries, bringing them our truth in terms of what’s happening in Honduras. We have advised the European senators about the need for them to investigate investments that are being carried out in Honduras. European companies and banks are financing natural resource extraction projects, the partners of which in Honduras might be persecuting and criminalizing people in our country. Following that, we have wrapped up the tour here in Washington, DC, a space in which we are carrying out meetings for the first time. It has been very helpful to build a relationship with the Inter-American Commission of Human Rights, which follows up on their precautionary measures. Above all there are cases of indigenous leaders with precautionary measures that the Honduran State isn’t really following up on and isn’t guaranteeing the life of those people. Additionally, several US legislators have heard our position regarding the criminalization being faced by land rights defenders. Overall, it has been an important tour. We will return home very content to do our work in the communities knowing that there could be political pressure from various governments toward our own to respect the human rights of people and indicate that being a human rights defender isn’t a crime.”

“CEPRODEC was the first institution in Honduras to receive accompaniment from Peace Brigades. We are very thankful and content because this accompaniment has permitted us to carry out our work in a better way. We have seen that the Honduran governmental authorities respect the international accompaniment. I think it is very important, and even more so the ability that accompaniment provides us to issue documents and statements that are then circulated to the networks to which PBI has access, bringing international eyes onto what is happening in our communities. We appreciate this effort and determination brought by youth and older people from around the world who come here from far away to share a year of accompaniment of our circumstances. We are truly thankful.”

PBI has accompanied CEHPRODEC since May 2014. Founded in 1991, CEHPRODEC provides legal assistance to rural and indigenous communities who are opposed to the installation of hydroelectric projects and mining in their territories. Between 2012 and March 2014, around 111 environmental and land rights defenders were murdered in Honduras, while many more suffered physical attacks and systematic persecution.